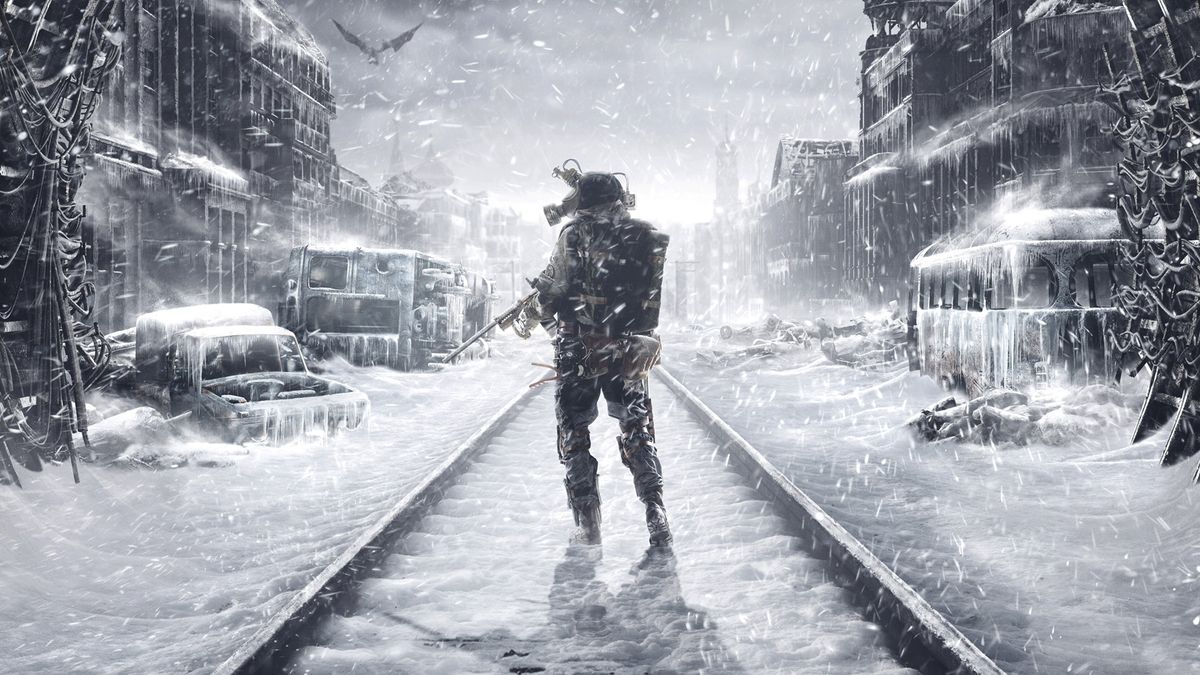 After two games spent in the claustrophobic gloom of the Moscow Metro, it’s a strange sensation, at least for a Metro game, to suddenly be staring across a vast, sun-bleached desert. Exodus is a post-apocalyptic road trip through a nuke-blasted Russia, and an arid expanse of what was once the Caspian Sea is one of a number of locations visited by Artyom and his band of survivors. But even with blue skies and the closest thing you can get to clean air in this grim, dead world, survival is still an everyday struggle.

I say road trip, but your primary mode of transport in Metro Exodus is an old Soviet-era steam train called the Aurora. The game begins in familiar surroundings—the shattered, radioactive ruins of Moscow and the labyrinth of tunnels beneath it. But it’s not long before the Aurora is speeding out of the fallen capital, along the Volga River, and into the wintry countryside. This is your first taste of the open world in Exodus, which is made up of several large, self-contained areas, rather than one continuous sprawl.

Metro has always been a rigidly, sometimes suffocatingly linear shooter, but now you have the opportunity to venture off the beaten path, scavenge, and explore. It’s a restrained freedom, limited by the size of the maps, but there’s something refreshing about an open world that focuses more on detail than size. Every location the Aurora stops at feels wonderfully hand-crafted and the weather, atmosphere, and lighting regularly change as the story spans the seasons, making for an excitingly varied game.

But this variety extends mainly to the setting and structure. The brutal, kinetic first-person combat and lightweight survival elements that define the Metro games haven’t changed in any significant way. Ammo and gas mask filters are still precious commodities, and Artyom still spends the majority of the game in scrappy, tense firefights with other men in gas masks. This means, despite the spectacular change of scenery, it still feels like part of the series. But it also makes Exodus, in some ways, rather disappointing in its lack of ambition.

The context, stakes, and location will change, and there are some fantastically dramatic set-pieces to be found in here, but it’s a shame how, fundamentally, every encounter in Metro boils down to shooting people. I know it sounds like I’m criticising an FPS for having too much S, but if you’re going to give me this big, fascinating, beautiful world to explore, I feel like there should be more interesting ways to interact with it. Sometimes you can approach a situation stealthily, tossing tin cans to distract guards and quietly killing or incapacitating them, but that’s about as exotic as it gets.

The furiously paced combat can be thrilling, especially when you start modding your guns, transforming puny revolvers into freakish weapons of mass destruction. But whether you’re fighting mutants or humans, the AI is never particularly sharp or reactive, and constantly scrabbling for ammo can be a chore. The guns feel great, and I love how you can strip enemy weapons and attach the scavenged parts to your own at a workbench. But the novelty of shooting hordes of crustaceans, bandits, and mutants soon wears off, and after a while I found myself yearning for more depth.

A new mutant type, the ridiculously named ‘‘, are zombie-like drones who rush you in packs, clambering over and occasionally throwing bits of rubble at you. I think they were going for something similar to the creatures in I Am Legend, but they’re clumsy, slow, and a drudge to kill, rather than some relentless, savage force to be reckoned with. Most of the mutants are generic, snarling monsters, and quite boring to fight, but there is one towards the end of the game that is actually kind of terrifying.

As for the survival elements, they do add some welcome texture to the game. Even though you’ve left the Metro, there are still moments where you have to equip your gas mask: radiation leaks, sandstorms, poison gas, and other nasty stuff. And every moment you spend in this toxic air, a timer ticks down, meaning you have to find a steady supply of replacement filters to stay alive. There’s crafting too, which makes scouring the world for materials to build ammo and repair your mask and guns an important part of your routine. None of these systems are invasive, however, and the light-touch survival management reinforces the fiction without ever being overbearing.

Outside of combat there are some other new features, including the ability to use binoculars. If you climb somewhere high, such as a rusty old crane near the Volga that rattles violently in the wind, you can scan the horizon and zoom in on points of interest, marking them on your map. You won’t know what it is until you travel there, which makes for some fun exploration, even if it’s usually just more things to shoot at. I do like how each map is littered with stories. Some are relayed through diary entries and tape recordings, but it’s the ones told by the environment that are the most vivid: a crashed plane with its skeletal pilot still at the controls, or an abandoned school littered with mouldy textbooks and colourful kids’ drawings.

There are a few vehicles too, usually reserved for the larger maps, and slightly silly ziplines straight out of a Far Cry game. The weather can change suddenly and there’s an ever-shifting day/night cycle, which you can speed up by sleeping at campsites. If you go somewhere at night there may be fewer enemies to deal with, but you could also be harassed by a deadly ball of lightning, which seems to be the Metro equivalent of the anomalies in the STALKER series. But this idea is underdeveloped, and I would have liked to experience more weirdness out there in the wasteland, to make leaving the relative comfort and familiarity of the Metro feel more alien and frightening.

What makes Exodus special, and the reason it held my interest all the way to the end despite the weak combat, is the journey. Freed from the dark maze of the Moscow Metro, the environment artists at 4A Games have achieved something remarkable here. From the frozen banks of the Volga to the dried-out Caspian Sea and beyond, the setting is constantly surprising and hauntingly beautiful. We’ve seen post-nuclear wastelands in a thousand videogames, but there’s something about 4A’s take on the concept that really creeps under your skin. A subtle air of hopelessness and melancholy that emphasises just how woefully tragic the state of this world is.

But by reaching out into the wider world, Metro loses some of its identity. The Moscow Metro, and the weird communities and cultures that developed there after the bombs fell, is one of the most interesting things about the series. Some of what you encounter on the surface in Exodus is just as imaginative, particularly the origins of a strange tribe you encounter in a lush boreal forest. But elsewhere it feels a little like a post-apocalypse by numbers, with shanty towns and bloodthirsty raiders straight out of Mad Max, and a general feeling that you’re treading familiar irradiated ground.

Metro Exodus also has some problems with storytelling. For one, the English voice acting is, for the most part, terrible. I don’t usually mind a bit of amateurish acting in games, but here it’s so exaggerated and overdramatic that I actually found it distracting. There is the option to switch to Russian voices, which feels more authentic to the setting, but there’s so much crosstalk that keeping track of the subtitles while playing is impractical. And there are too many scenes where you have to stand and wait as people heap big spoonfuls of exposition into your ears, talking interminably about what you’re going to do next rather than just letting you, you know, do it.

Between major locations you can explore the Aurora as it hurtles along the tracks to its next destination, and it’s here where the real heart of the game lies. The overarching plot is enjoyable enough, but it’s the interactions between the characters, and how they spend their downtime on the train, that I found the most resonant. You’ll see one character serenading another with his guitar; someone looking wistfully out of a window as the scenery rolls by; people telling jokes and shooting the shit in the communal area. The sense of community aboard the Aurora, of family, is palpable—which gives those moments when these mostly likeable characters are in danger added weight.

By leaving the tunnels of the Moscow Metro behind, the artists and world-builders at 4A Games have created something pretty incredible here. This voyage through a bleak Russian wasteland, from abandoned cities and burning deserts to autumnal forests and freezing tundras, is full of surprises and stunning scenery. It’s just a shame your interaction with this brave new world largely consists of shooting at it. Metro Exodus is, in many ways, a pretty rote FPS attached to a setting that deserves much better. But when brakes screech as it pulls into the next station, the excitement of what lies ahead always makes up for its shortcomings.